View these StoryMaps to learn about past winners of the award. Slides include photos, video, audio and links to more information. This is a helpful presentation and teaching tool for journalism professors and high school instructors. 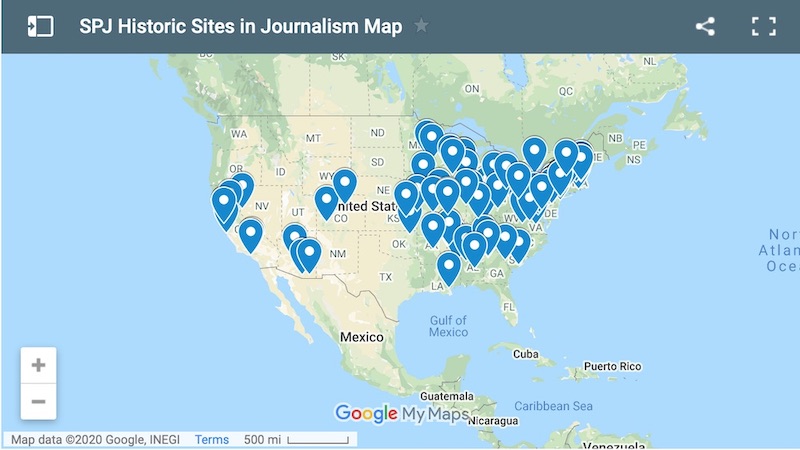 To learn more about the locations SPJ has as a Historic Sites in Journalism, scroll to the bottom of the page or follow this link.

The Society’s Historic Sites in Journalism program honors the people and places that have played important roles in American journalistic history. The program dates back to 1942.

Nominations must possess an accurate significance to the history of journalism.

Nomination form should be accompanied by a letter(s) of recommendation that reflects the nominee’s national historic significance in journalism and why the nominee is deserving of this national recognition. Nominations should also include an indication of the specific location (i.e. building, street address, inside or outside installation) where a bronze plaque would be placed. Nominators should contact the rightful authorities (such as owner of the building) to ensure that they are amenable to placement of a plaque.

Honorees will be announced and honored at a special celebration event determined by the award recipient. A bronze plaque is displayed at the location marking it as a Historic Site in Journalism.

Honorees will be announced and honored at a special celebration event. A bronze plaque is displayed at the location marking it as a Historic Site in Journalism.

All entries should be submitted no later than March 19.

2011
The Silverton Standard & the Miner

1987
— San Francisco, awarded to the San Francisco Chronicle in honor of the founders Michel H. de Young and Charles de Young. The brothers founded the Daily Dramatic Chronicle which appeared as the Chronicle in 1868.
— Memphis, Tenn., at the Beale Street Baptist Church, in honor of Ida B. Wells-Barnett, editor of the Memphis Free Speech, a Black newspaper.
— New York City, to The Amsterdam News, the oldest Black newspaper in New York City. Edited by James L. Hicks, first Black journalist accredited to cover the Korean War and the United Nations.

1986
— Montpelier, VA., the Virginia estate of James Madison.
— Baltimore, The Sun, in honor of one of the newspaper’s founders, A. S. Abell.
— Greenville, Ohio, birthplace of Lowell Thomas, radio and television broadcaster
— Mississippi State University, Starkville, Miss., marks the site of the personal and professional papers of William Turner Catledge, late editor of The New York Times.
— New York City, accepted by the Magazine Publishers Association and the American Society of Magazine Editors in honor of Ida Tarbell, muckraking journalist of the turn of the century.

1984
— New York City, Margaret Bourke-White (1904-1971), one of America’s best-known photojournalists.
— Kansas City, Mo., the Roy Wilkins site at the Kansas City Call, marked by the Kansas City Professional Chapter in recognition of Roy Wilkins’ editorship there between 1923 and 1931. The Kansas City Association of Black Journalists was a co-sponsor of the dedication.
— Washington, D.C., United Press International, upon its 75th.anniversary.

1981
Philadelphia, Richard Harding Davis, one of the most adventurous war correspondents of his time who was known for his colorful reportage during six wars.

1976
— Philadelphia, The Pennsylvania Packet or the General Advertiser, the first successful daily newspaper in the United States and first to publish the Declaration of Independence and the U. S. Constitution.
— Rochester, N.Y., Frederick Douglass, founder in 1847
of the North Star, which with its successor newspapers under Douglass’s direction was the leading Black journal in the United States in the antebellum period.
— Canton, Ohio, Donald Ring Mellett, publisher of the Canton Daily News, who was gunned down in front of his home after editorializing against Canton’s lawless elements and city officials’ ineptness.

1974
— University of Alabama, Supreme Court Justice Hugo L. Black, eloquent and effective for the principle of a free and untrammeled press.
— Chicago, the Chicago Defender, for pioneering and continuous leadership and strength in the Black press.
— Gathland State Park, Md., Townsend’s War Correspondents Arch, a memorial to Civil War correspondents of the North and the South.

1970
— Sacramento, Calif., the Sacramento Union, oldest daily in the West, founded in 1851.
— Madison, Wis., the Wisconsin Press Association, oldest continuing state press association in the nation, existing since the 1830’s.
— Des Moines, Iowa, J. N. (Ding) Darling and the Des Moines Register and Tribune. Darling’s cartoons catapulted him into national prominence and were a factor in enhancing the great prestige of his newspaper in the first half of the 20th century.

1969
— Hannibal, Mo., 206 Hill Street, boyhood home of Samuel Clemens (Mark Twain) and site of the Hannibal Journal, which started Twain on the way to fame as one of America’s great writers.
— Lexington, Va., Reid Hall, the journalism building on the campus of Washington and Lee University. Here the first formal instruction in journalism in the history of education was initiated by General Robert E. Lee in 1869.
— Atlanta, Henry Woodfin Grady (1850-1889), and the Atlanta Constitution, leaders in creating a more comprehensive, interpretative journalism in the South.

1968
— Gunston Hall, Va., home of George Mason, author of Virginia Declaration of Rights (1776), which gave the first expression of a free press its binding, legal form.
— Boston, James Franklin’s New England Courant, first newspaper published in the United States without license or authority. Washington, D.C., the Washington Globe (1831-1845), published by Francis Preston Blair and John C. Rives.
— Cincinnati, The Centinel of the North-Western Territory, marking the 175th. anniversary of the first newspaper in the Northwest Territory, published in 1793.

1962
New York City, Horace Greeley, one of the most influential newspaper editors in American history.

1956
Columbia, Mo., Walter Williams and the University of Missouri School of Journalism. First school of journalism in the nation.

1952
Alton, Ill., Elijah Parish Lovejoy, editor, The Observer, and a militant abolitionist assassinated by his enemies.

1946
San Francisco, Calif., James King of William, founder, editor and publisher, the San Francisco Daily Evening Bulletin. He fought corruption in municipal government and was assassinated by a politician after many threats on his life.

1945
A contribution was made to Peter Zenger Memorial Fund.

1942
Bennington, Vt., Anthony Haswell, editor and publisher, the Vermont Gazette. He was jailed for fighting the Sedition Act.

 SPJ condemns China's attacks on the media in Hong Kong