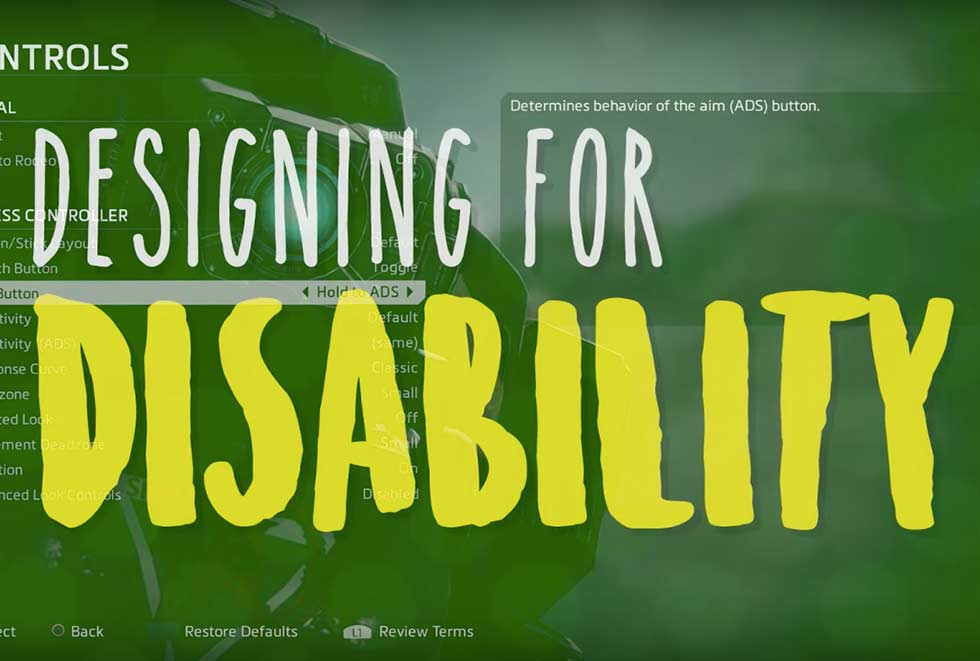 Judges’ conclusions: All three judges were effusive. “What a cool story idea, and set up cleanly in 30 seconds with game footage and good narration,” one raved. Said another: “Really good stuff.” And the third delivered the highest compliment of all: “You’ve not only ignited in me an interest in this topic, but I’m actually hungry for more of your specific content and storytelling — and I’ve subscribed.”

SECOND PLACE:
The Story of Tetris
By Gaming Historian

Judge’s comment: “This is fucking cool. I like the scene setting. Lots of historical detail, but where are the sources? I couldn't find sources for the history in the video nor in the description. But it’s very accessible to non-gamers.”

THIRD PLACE (tie):
Meet SonicFox, The Queer Furry Who's Destroying Everyone
By Kotaku

Judge’s comment: “I thought it was weird that Dream Daddy started not with the game, but with, ‘Well here's how I got a story idea.’ Entertainment journalists inserting themselves into the story is...blech. But after that, it was really good. Varied interview settings, interesting people, much more clips of the game, interesting commentary about design choices. As for Sonic Fox, this is the best interview submitted. The questions are confident and result in interesting answers. I also like the use of chyrons to explain jargon like TO.”

Judges’ conclusions: The weakest category of 2018 has been the weakest in the Kunkel’s short history. The two honorable mentions from one source: Super BunnyHop, which won this category in 2015. Judges did something similar last year, issuing a single honorable mention. What’s the problem? As one judge said about several entries, “They made me not want to care. They do have news in them, it just takes too long to get to the point.” News is hard to write, and it’s harder to record. The judges appreciated the content but also felt there was too much opinion and not enough explanation — a recurring problem over the past four years. 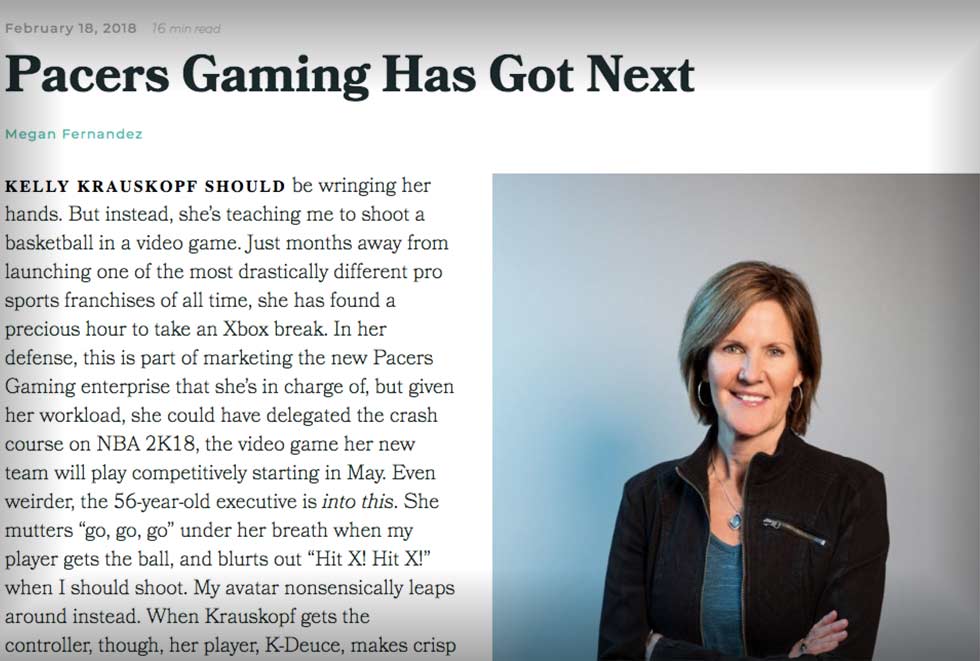 First Place:
Pacers Gaming Has Got Next
By Megan Fernandez, Indy Monthly

Judges’ conclusions: “Great sourcing, great info, great reporting,” commended one judge. Another added: “I love how this is set up with the 56-year-old ‘K-Deuce’ and how the anecdotes continue throughout the story. It delays the inevitable, ‘Here's what esports is’ until you're invested in somebody from the story. It's obviously crafted with the magazine's average reader in mind.”

Judge’s comment: “This is a clean straight news story from a student. Serviceable, but not exciting. Sourced well and interesting to the student audience.”

Judge’s comment: “This is a cool example of how to weave in details about esports writ large while talking about a specific and local angle, instead of dumping an encyclopedic recap about esports up front like several of these nominees do. But a bit boring.”

Judge’s comment: This is a story that can juggle the personal and the big picture, and I really hope people submitting to the Kunkels are looking at this kind of story. There are interesting (and sad) details and the story is tightly focused even as it moves between players. Not sure the overall theme is strung together too well. But we have the ingredients we’ve been looking for. 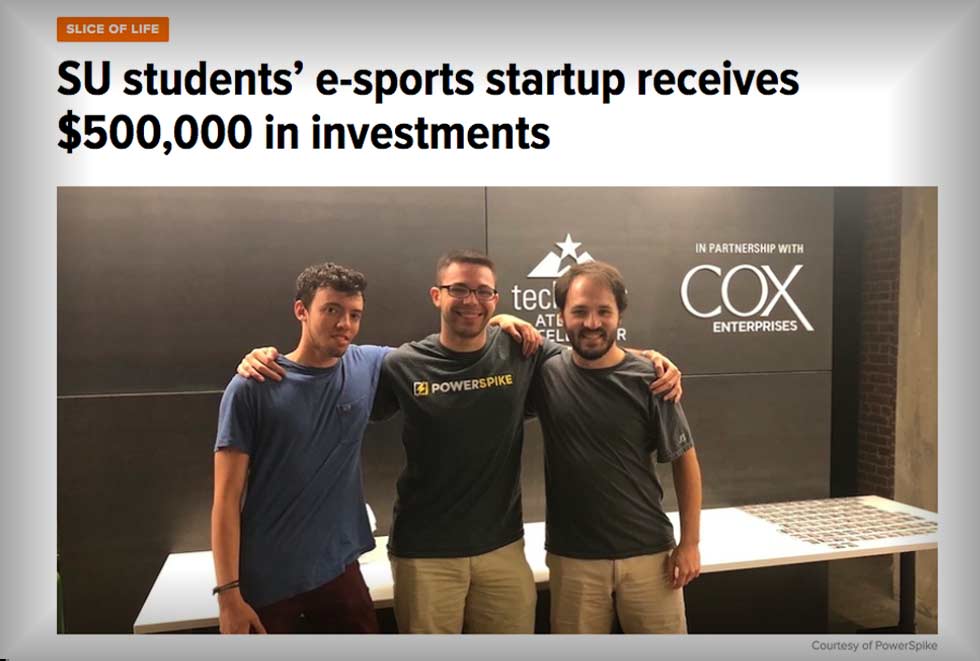 Judges’ conclusions: “Telling the story of how the business began results in a pretty cool human interest piece,” one judge said. Another was concerned that, “It kind of feels like a press release at first.” Still, a fine explanation of a significant investment.

Judge’s comment: “A really fucking cool story. It’s confusing up top and there’s a lack of editing, but there’s also a lot of great reporting and a lot of great detail.”

Judge’s comment: “The interviews they got from the people involved brought the human interest factor into it. But the headline and the article image doesn’t match the piece, which is a gigantic disservice.” 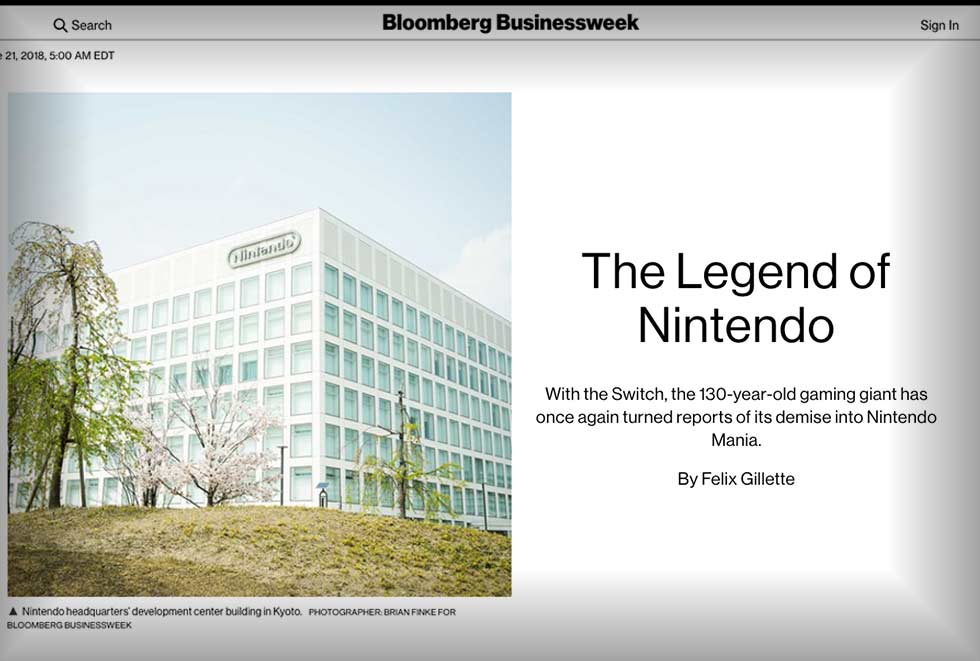 First Place:
The Legend of Nintendo
By Felix Gillette, Bloomberg

Judges’ conclusions: “Insightful in understated ways — love how they place Nintendo culture in the context of Kyoto culture,” one judge observed. “It manages to juggle the business sensibilities and a human interest space.” Another judge was less impressed: “Damn does the journalist love using flowery/pretentious language: phantasmagoric, zoologically ornate, kaleidoscopic. On the bright side, this feature has a lot of information about things the company has sold, as well as their projections and commentary from the people in charge.”

Judge’s comment: “Not a lot of people follow up on crowdfunding results, let alone vacation prizes. That's cool. It reads like the intro to a novel at first, which is pretty good for a feature story to open up with.”

Judge’s comment: “All these people are going on the record in great detail, and that's kind of cool. Also cool: These sources are really blunt and clear.”

HONORABLE MENTION:
Beneath a Starless Sky: Pillars of Eternity and the Infinity Engine Era
By David Craddock, Shacknews

Judge’s comment: “The scale of this is amazing. Holy shit, seven months of interviews and basically a book, and it just shows everywhere. The quotes are awesome, and the writing is rich, but it’s also a little clunky and grandiose.” 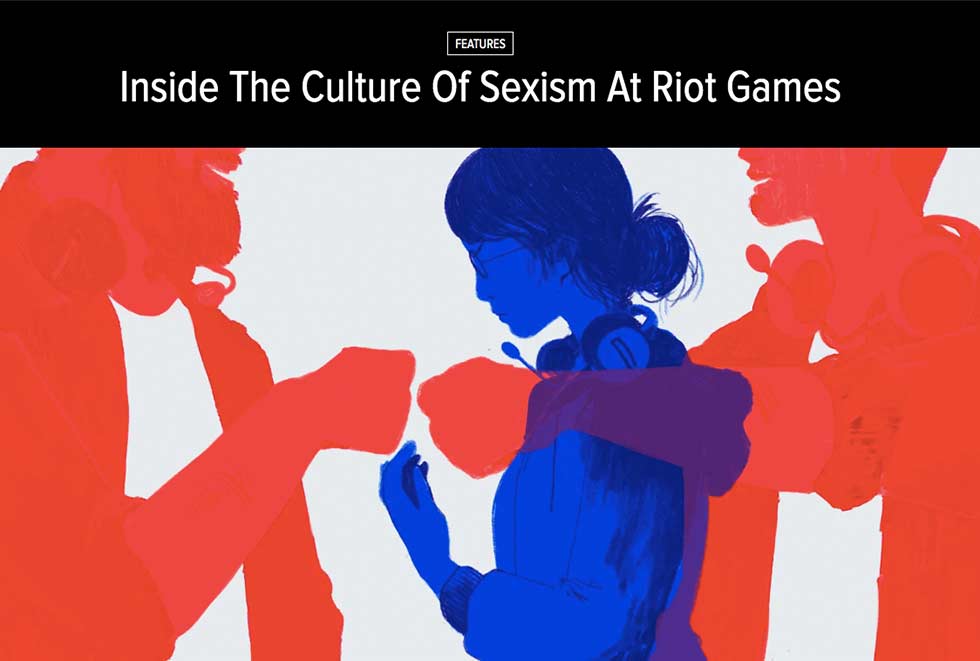 First Place:
Inside The Culture Of Sexism At Riot Games
By Cecilia D'Anastasio, Kotaku

Judges’ conclusions: “Fantastic anecdotes from months of reporting,” one judge declared. “An important story,” said another. “I remember this story and people talking about it.” Our third judge liked it, but not as much: “A bit more self-congratulatory than I'd like but forgivable given the nature of the work.” Then again, he’s our resident hard-ass.

Judge’s comment: “A great and important story.” But all the judges were amused that this writer won, given how much he hates them for reasons that aren’t true.

Judge’s comment: “Good research, sourcing, and topic. But you haven't given me any info to contextualize this.”

HONORABLE MENTION:
Fact Check: Video Games Do *Not* Cause Violence
By Allum Bokhari and Charlie Nash

Judge’s comment: Actually, all three judges called this “interesting.” One said, “If we accept Trump talking about a topic as news, this isn't terrible.” But all three felt compelled to encourage Breitbart to do more real journalism, hence this honorable mention.