His sons said their father died this morning of health issues related to age and Alzheimer's in his apartment in a Prescott, Ariz., assisted living community.

Graves and his wife, Audrey Gayle Parsnick Graves, moved to Prescott in April 1994 from Hawaii after he retired from the AP in 1993. She died in Prescott at age 82 in 2012. They were married 57 years. 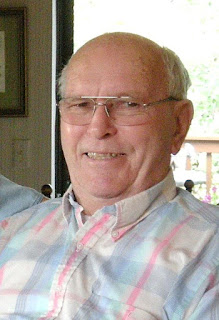 Born Nov. 11, 1926, in Robinson (Crawford Co.), Ill., Howard Graves was the son of Perry and Marvel Graves. He had three brothers and sister Julia Graves Roberson, Robinson, Ill., who survives.

His parents were owners/operators of Robinson Lumber and Coal Co., where he worked during and after graduating from Robinson Township High School May 23, 1944. Later, thanks to his familys connection to the lumber trade, he worked for a summer at a Toledo, Ore., sawmill.

In high school he was student body president, played football and ran track and covered Robinson Township High athletics for the weekly Robinson Argus newspaper and as a stringer for the Chicago Daily News and the Champaign, Ill., News-Gazette.

In October 1944, he left the Robinson Argus and a job as sports editor to enlist in the U.S. Navy. He served on the newly-launched U.S.S. Midway aircraft carrier. World War II ended in August 1945 and he was discharged a year later.

As a reporter for the Linfield Review student newspaper, he covered the 1948 Republican presidential debate held in Portland, Ore., between candidates Gov. Thomas Dewey of New York and Harold Stassen, former Minnesota governor.

In the summer of 1948, he was among those who were drivers  nicknamed gearjammers -- of the iconic canvas topped red bus driving tourists through Glacier National Park in Montana.

Deciding not to continue in college, he worked as a reporter and editor on daily and weekly newspapers in Robinson and Centralia, Ill, and Shelby, Mont.

His reporting skills caught the attention of the Associated Press which he joined April 21, 1952. During his AP career, Graves was a news writer in Little Rock, Ark; Helena, Mont; and Denver, Colo. In May 1957, he became an AP administrator. Twice he was with the Portland, Ore., AP bureau, first 1957-1962 as regional membership executive for the Northwest and then as chief of the bureau, 1977-1982. For 14 years, he was AP bureau chief in Albuquerque, N.M., 1962-1977. For 11 years, starting in November 1982 until his retirement at the end of 1993, he was Honolulu AP bureau chief.

In summary, he spent 40 years-plus with the Associated Press, 31 of those years as a chief of bureau. At the time of his retirement, he was the senior chief of bureau in the domestic service.

Graves once wrote that he "never won an award for reporting or writing." His career, one of journalistic excellence and leadership, proved stellar, if not award-winning.

Upon Graves retirement, Louis D. Boccardi, Associated Press president/CEO said Graves carried the flag high with honor. Another AP executive said, Graves was "probably the most modest man Ive ever known. And he would be the last guy to call attention to his own achievements." And, yet another executive of the AP said, Howards objectivity, investigative abilities, tenacity and modesty won them all."

Graves was nominated by the AP for the 1977 Pulitzer Prize for Best Regional Enterprise Reporting. His nomination was for more than 120 stories he wrote in 10 months  traveling more than 30,000 miles -- for AP out of the Albuquerque bureau. The stories were about the misappropriation and misspending of hundreds of millions of federal dollars by the Navajo tribal government on the 25,000-square-mile Navajo Reservation in New Mexico, Arizona and Utah.

In a 1976 letter, the editor of the Grants, N.M., Daily Beacon (now the Cibola County Beacon) newspaper said, "Howard Graves has done the honest, decent citizens of our country a great service through his investigative series on the Navajo tribal government."

An editorial in the Farmington, N.M, Daily Times praised Graves stories "all based on the facts as he was able to put them together, after hours, days, and months of interviewing people and studying documents."

While in New Mexico, Graves was active in freedom of information matters. He received the 1972 Dan Burrows Memorial Award for work in the field from the New Mexico Society of Professional Journalists chapter. He was cited for helping protect and promote freedom of the press and free flow of information to the public by the news media.

During Graves tenure as AP Portland bureau chief, he directed news coverage prior to and after the 1980 eruption of Mount St. Helens in southwestern Washington and the 1978 crash in suburban Portland of United Airlines Flight 173 after it ran out of fuel. While based in Oregon, he traveled and spoke nationally while serving as 1980-1981 president of the Society of Professional Journalists.

As Honolulu AP bureau chief, Graves directed news and news photo coverage for an area more than three million square miles covering six time zones. He supervised coverage of Philippines president Ferdinand Marcos and his wife, Imelda going into exile in Hawaii; hurricanes in Hawaii and the Central Pacific; Aloha Airlines Flight 243s fuselage being ripped apart after an explosive decompression in flight and the 50th anniversary of the Pearl Harbor attack. He wrote of political status changes in the UNs Trust Territory of the Pacific and the U.S. insular areas of Guam and American Samoa. He was the primary reporter on the Republic of Palau in Micronesia becoming an independent country in 1994.

As an AP bureau chief, Graves first priority was management. But, he always reported. For example, he was on a first name basis with Navajo leaders while working in the Albuquerque bureau. From the Honolulu bureau, he traveled throughout the Central Pacific and made contacts and gained insights which were reflected in what he wrote.

Following his retirement from the AP, a Honolulu Star-Bulletin columnist wrote, "No journalist knows the present and former U.S.-administered islands in the Pacific better than Howard Graves." Another columnist for the same newspaper called Graves, "Mr. Pacific."

During his career, he spoke on university campuses from Florida to Alaska.

After retiring to Prescott, Ariz., which Graves the journalist liked to refer to as Press-kit, he spoke at Linfield College, Washington State University and civic groups about "Americas Forgotten Colonies." His speech was about the U.S. territories in the Western Pacific, nuclear test bombing in the Pacific after World War II, and why the U.S. holds onto the possessions.

Also, in retirement, he served on the advisory board for the Northern Arizona University Lumberjack student newspaper and was writing and editing coach at the Gallup, N.M., Independent daily newspaper.